Detecting Buried objects in a harbour

Detection of an old anchor

DETECTING BURIED OBJECTS IN A harbour

The objective was to detect and identify buried metallic objects in a harbour before dredging works. In particular, the detection of UXO was needed to secure the works, with the possibility of non-ferrous LMB mines in the area

The standard methods generally used to detect buried objects are usually not effective in harbours. Indeed, the environment of harbours is often magnetically t saturated, noises are interfering with acoutic systems, and biogenic gas is often present. The MAPPEM system, as an active electromagnetic measurement tool, allows effective measurements even in noisy environments such as harbours. We have developed a specific data processing (BODIES processing) to easily identify anomalies caused by the presence of buried objects.

The goal of the project was to detect sandy areas and captrock in a site before a dredging campaign. In particular, we were looking for outcropping rocks to secure and optimize the works.

Resistivity imaging of the marine subsurface using electromagnetic tools is particularly effective in the context of dredging because it highlights strong resistivity contrasts between sedimentary (e.g., sand) and rocky areas.

For this reason, our tools are particularly adapted to facilitate dredging works, to secure and optimize them by avoiding rocky obstructions, and by saving time in the location of possible sandy areas. 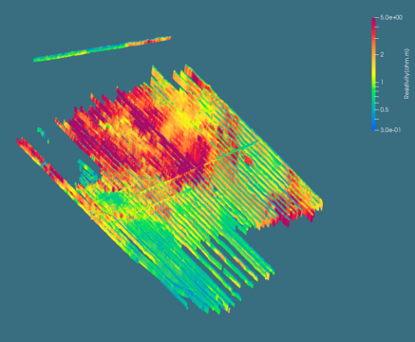 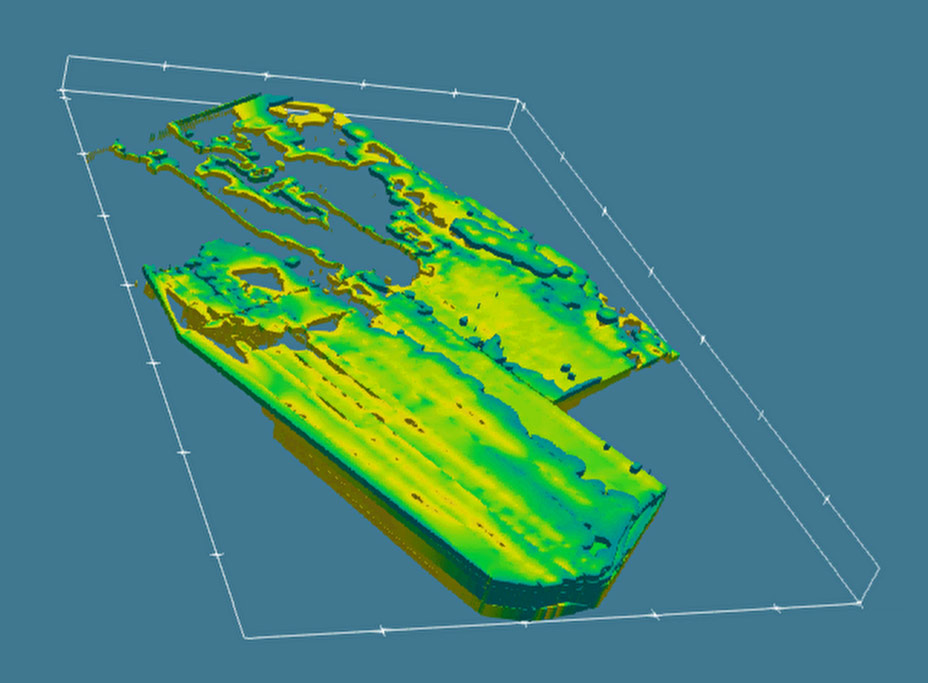 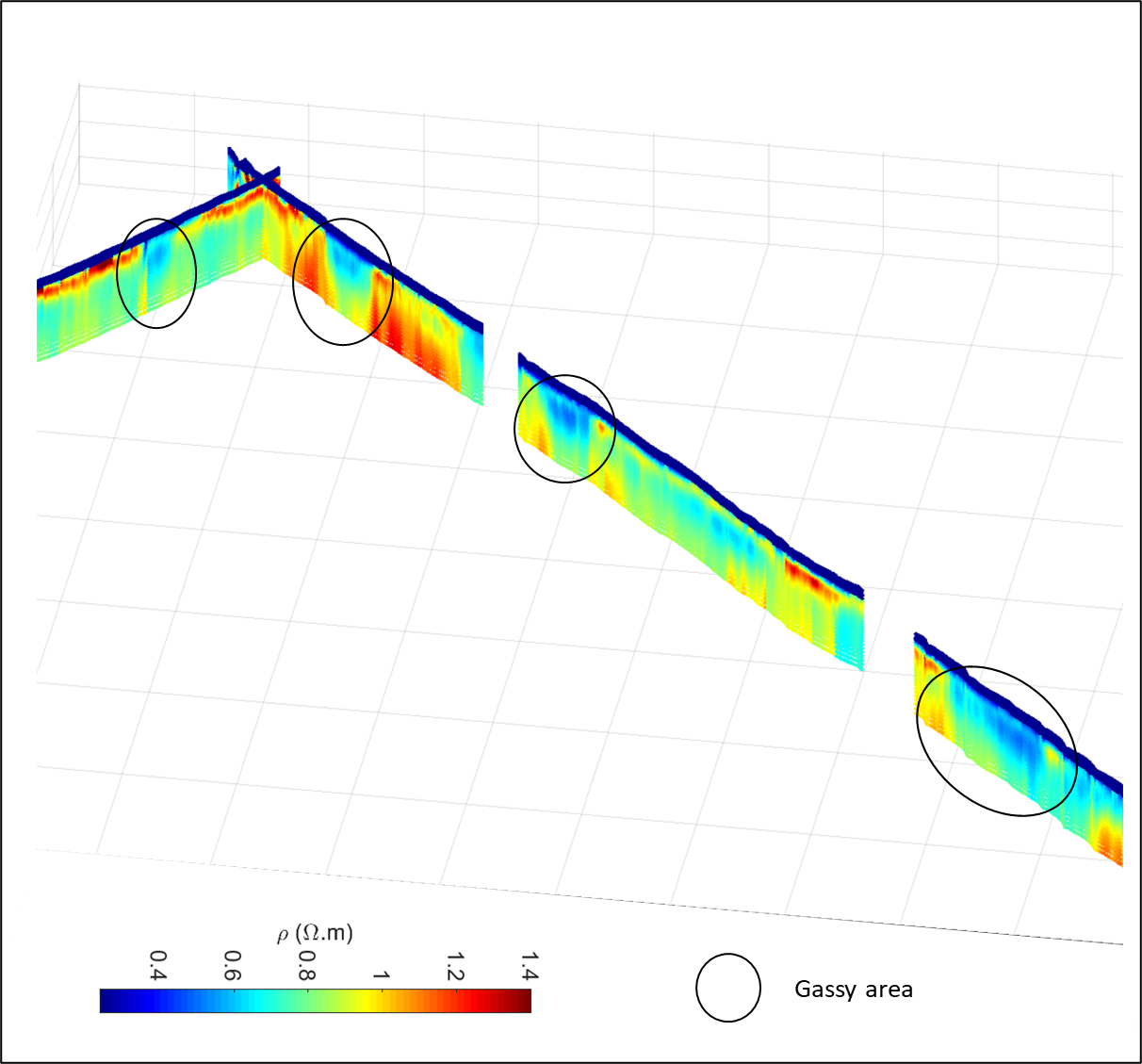 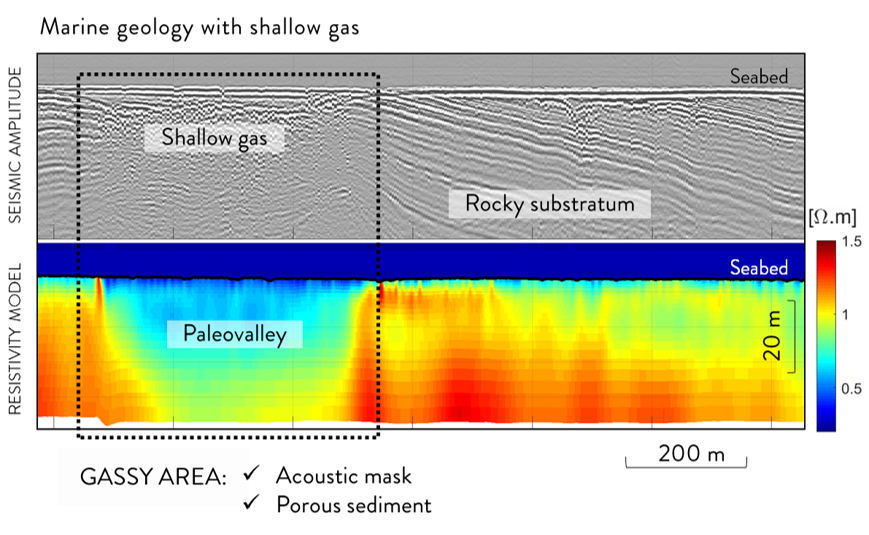 The main objective of the survey was to characterize the marine subseabed, composed of shallow gas-bearing sediments. The survey was conducted together with Ifremer, who carried out a Ultra High Resolution seismic imaging on the same lines.

As gas bubbles are a strong mask for acoustic signals, seismic imaging is not able to provide information of the soil geometry below the gas caps. The resistivity survey  added information about the properties of the gas-bearing sediments, especially their particularly high porosity.

The objective of the project was to image the subsurface of the Marine Renewable Energy site located off Saint-Nazaire (France). Indeed, this site has the particularity to present a limestone geology having undergone a phenomenon of karstification in places.

Karstic geologies are often complex to study due to their high heterogeneity and the high reflectivity of the rock, considerably limiting the penetration of conventional seismic imaging. Karstic zones can present dissolution voids and thus may have a different mechanical behavior from the surrounding intact rock. Thus, this dissolution phenomenon may have an influence on geotechnical design parameters of the foundations. 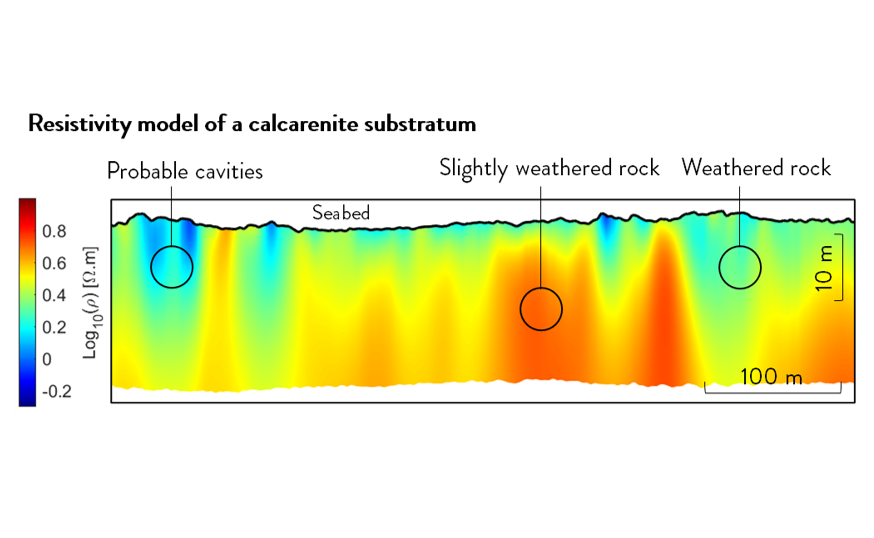 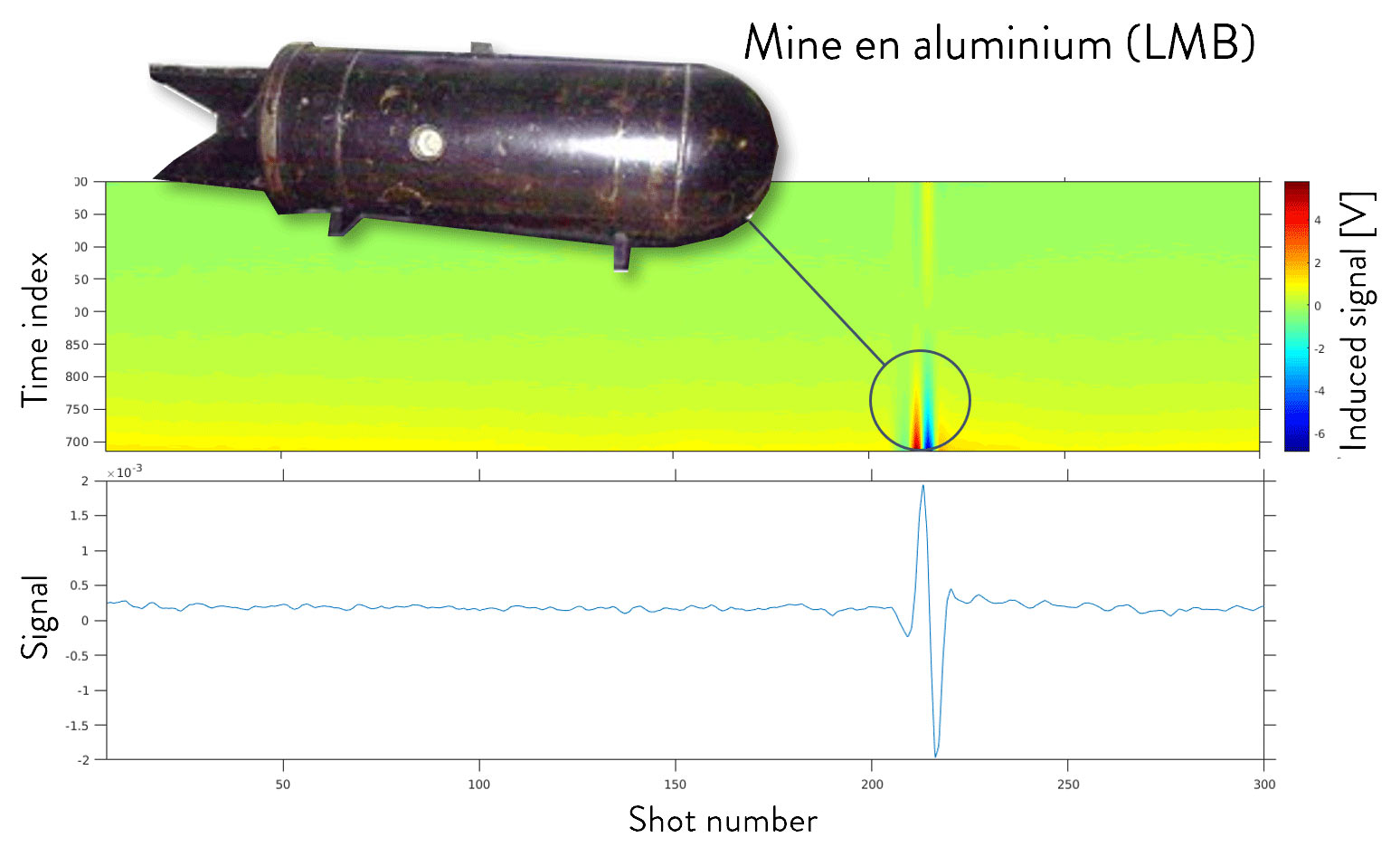 Detecting an Aluminum LMB mine

The goal of this project was to study the electromagnetic signature of a German aluminum LMB mine from the Second World War and located off Dieppe. This mine had been identified during the investigation of the planned MRE site off Dieppe (France). The MAPPEM system coud successfully detect and localize the mine and is the only system on the market directly capable of detecting such items.

With a water depth of 24 m, a superficial geology composed of sand and a USBL positioning system, the conditions of the electromagnetic acquisition were good to deploy the MAPPEM system and investigate the LMB mine site in order to record its electromagnetic signature. Several direct detection of the LMB mine have been recorded.

DEtecting Objects around a Ship wreck

The goal of this project was to detect metallic objects around a ship wreck during an archological survey but also to study the electromagnetic signature of a ship anchor identified on the seabed and coming from a wreck located in the vicinity of Brest.

An archaeological prospecting project was held by the DRASSM to search for the remains of the Cordelière and the Regent dating from the 16th century. Mappem Geophysics completed the measurements together with other techniques (magnetometer, side-scan sonar, ROV, etc.) in order to detect various clues to facilitate the research. In particular, the aim was to locate the metallic objects present in the prospecting area. Indeed, the two lost wrecks were equipped with artillery pieces, some of which (massive) made of bronze, being undetectable by classical prospecting techniques if buried in the sediment. The campaign took place in challenging conditions (50m deep, currents), with no particular technical difficulties and very good data quality. The system used was the MAPPEM-3D.

The processing of electromagnetic data was done using the "Bodies" process adapted to buried object detection. 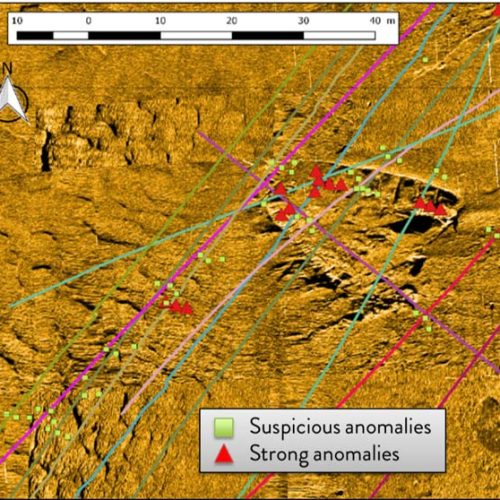 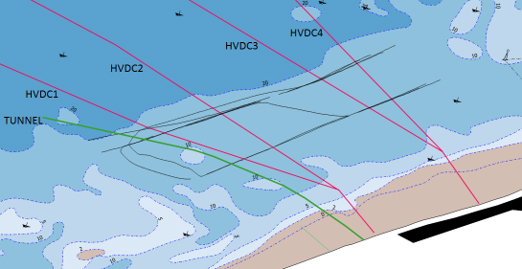 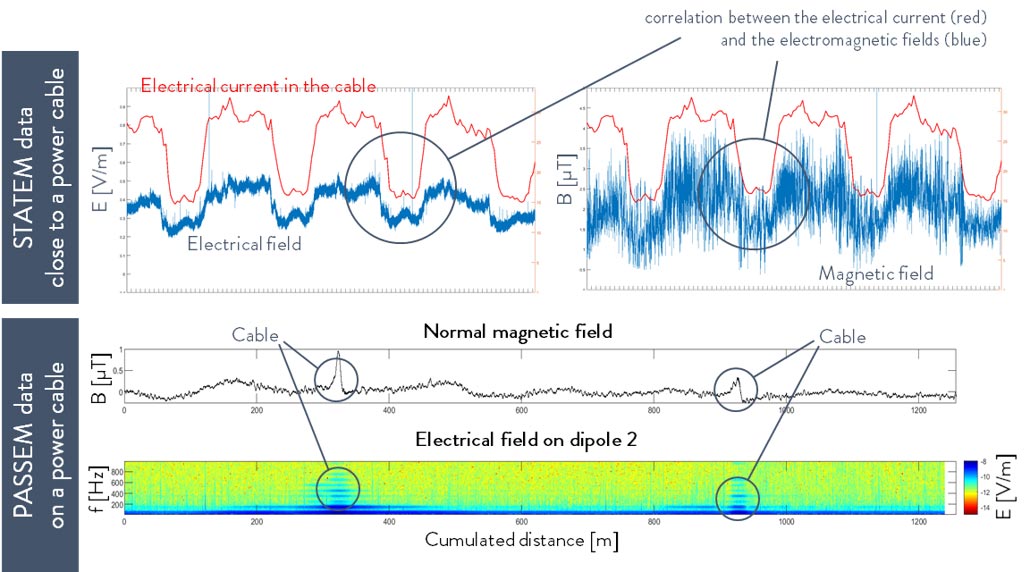 The goal of this project was to measure the electromagnetic signature of High Voltage Direct Current (HDVC) power cables located off Calais and off Jersey, in order to assess their potential impact on the environment. MAPPEM Geophysics developped unique instruments, towed or fixed on the bottom, to precisely measure electromagnetic fields from marine infrastructures.

HVDC cables, in which  high intensity electrical current flows, generate a electromagnetic signals created by the electrical current. In theory, the electric field emitted by a shielded cable, in which a perfect direct current flows, should be zero. However the precision of MAPPEM allows to detect all variations in the fields. Electric fields are induced by the variations of the magnetic field in the sea water.

The objective of the measurements carried out by the PASSEM or STATEM systems was to confront the theory with the reality of the electromagnetic fields generated near the cables.

The main objective of the project was to study the electromagnetic signature of old transatlantic telegraphic cables of 6 cm diameter located in the creek of Deolen, in Brittany, France.

The active electromagnetic survey was carried out in Deolen to detect the old telegraphic cables located in the creek. These cables used to link the European continent to America at the beginning of the 20th Century.

Two types of data were recorded:

The cables are easily detected with our system despite their small diameter. This area is a good test zone for MAPPEM to regularly train and test new developments. 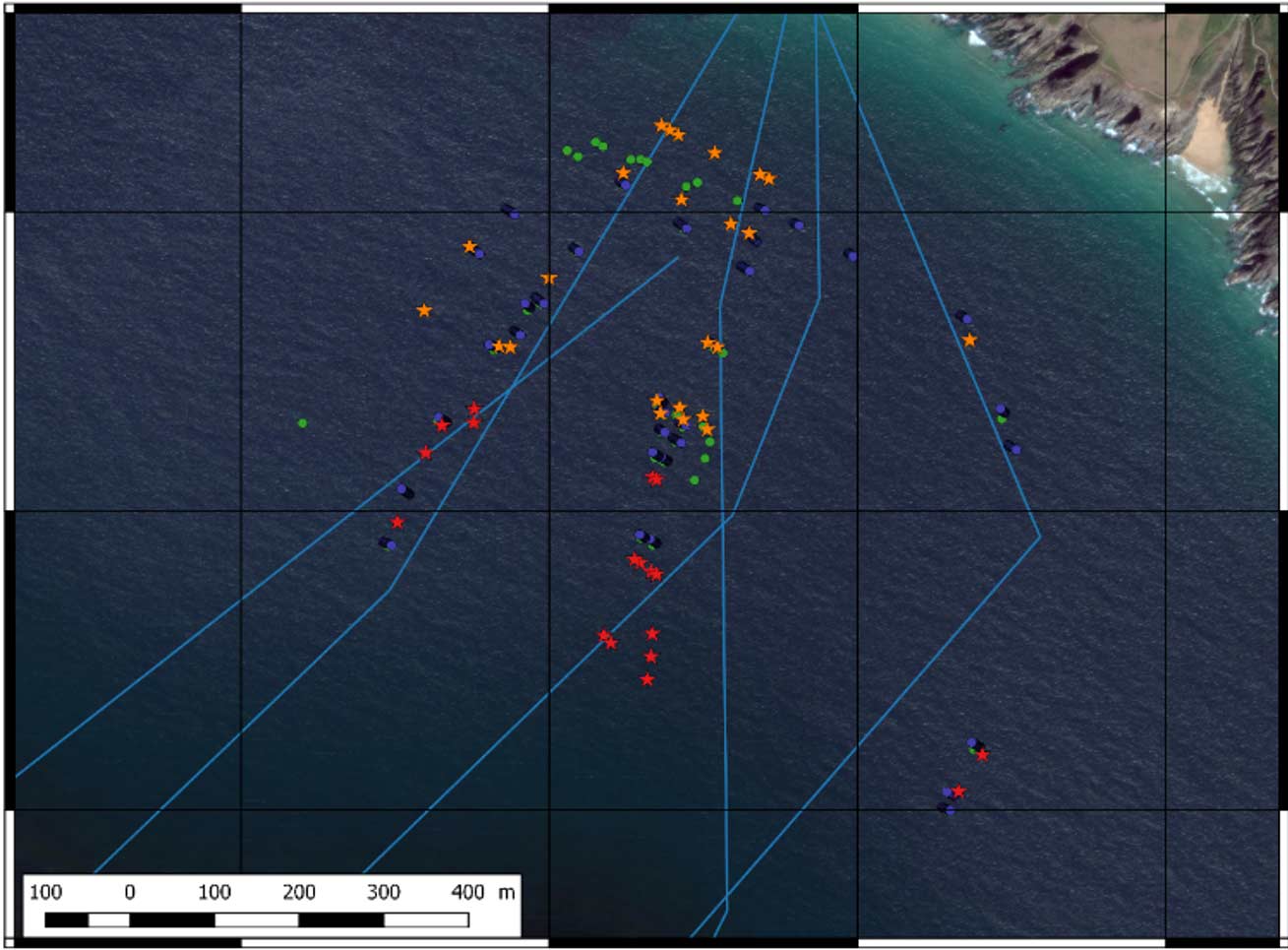 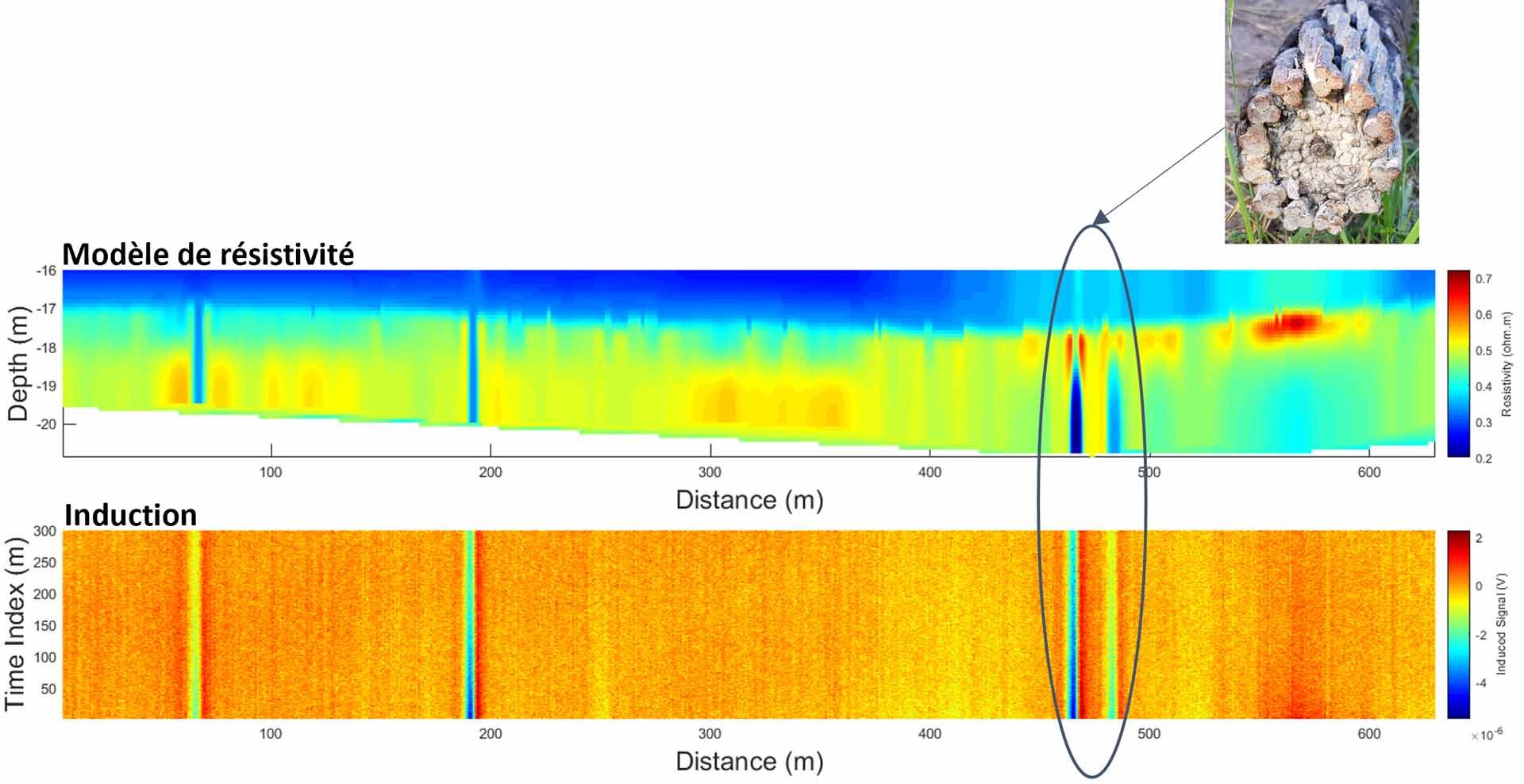 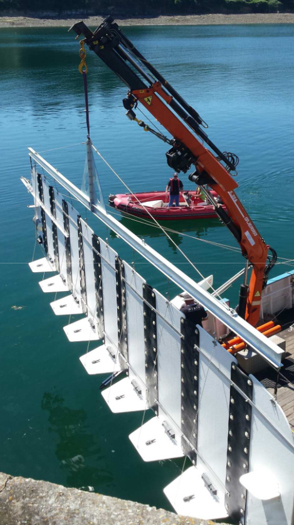 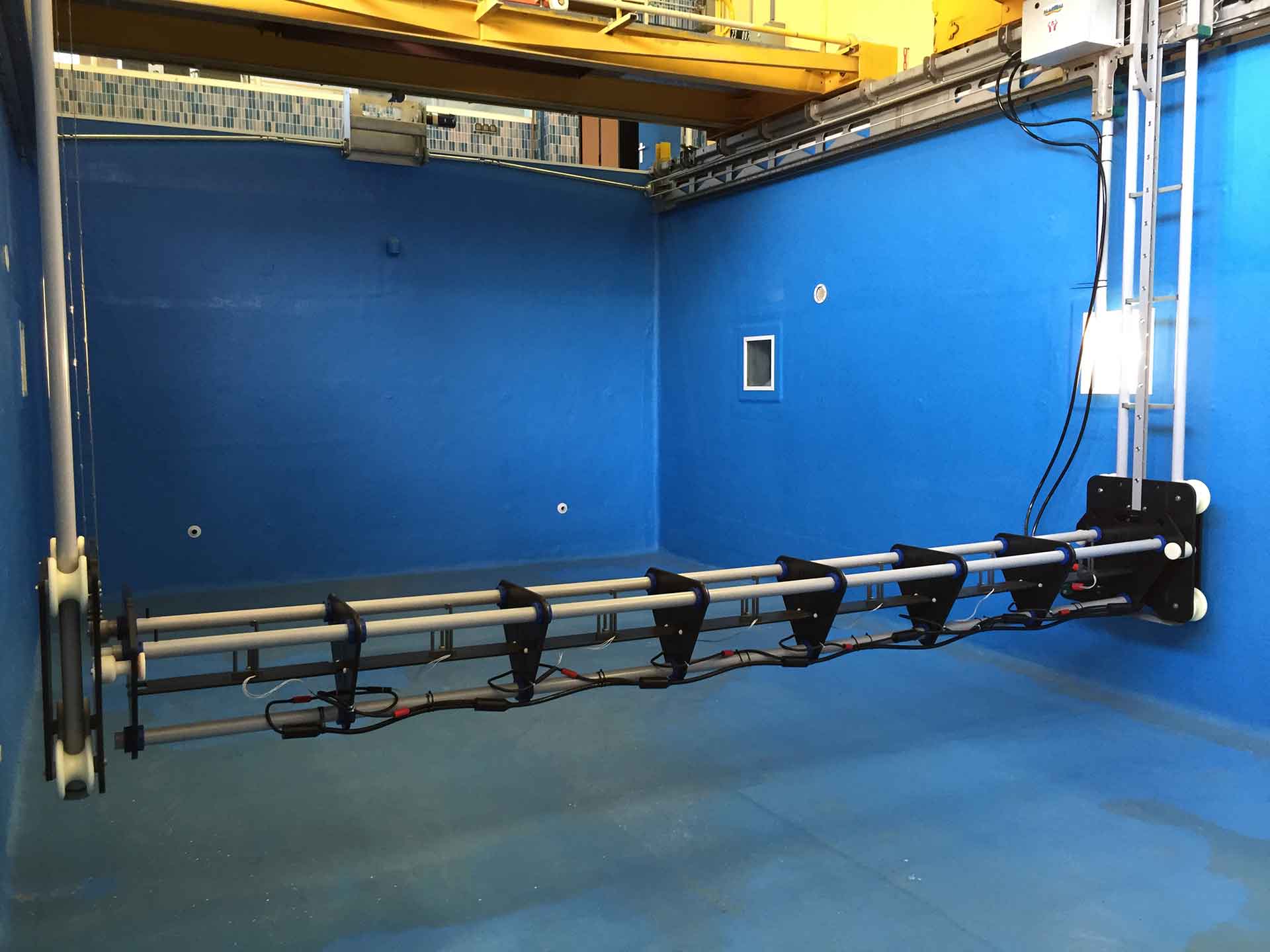 Event before the creation of  MAPPEM Geophysics, the team has been developing numerous R&D projects on various subjects related to marine electromagnetics. Constant innovation is the key of our identity and we carry out numerous research and development projects for different sectors. In particular, we already have developed several projects with the Defense sector since 2014. These projects are related to our unique know-how and expertise on the generation and measurements